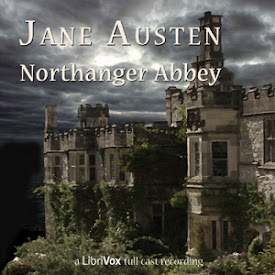 Northanger Abbey follows seventeen-year-old Gothic novel aficionado Catherine Morland and family friends Mr. and Mrs. Allen as they visit Bath. It is Catherine's first visit there. She meets new friends, such as Isabella Thorpe, and goes to balls. Catherine finds herself pursued by Isabella's brother, the rough-mannered, slovenly John Thorpe, and by her real love interest, Henry Tilney. She also becomes friends with Eleanor Tilney, Henry's younger sister. Henry captivates her with his view on novels and his knowledge of history and the world. General Tilney (Henry and Eleanor's father) invites Catherine to visit their estate, Northanger Abbey, which, from her reading of Ann Radcliffe's Gothic novel The Mysteries of Udolpho, she expects to be dark, ancient and full of Gothic horrors and fantastical mystery. - Summary by Wikipedia

Everything was great except General Tilney sounded like a wild animal.

What on earth was wrong with General Tillney? Otherwise, great book and great audio.

The narrator has a lovely voice and does quite well until other people come in. There are jumps to other voices during the narration about different characters. Not just other voices doing the words that the character is saying. For example you'll have another voice cut in and say what that character is doing and thinking. It a little confusing and unnecessary. I understand that it's a dramatic reading but the narrator needs to stay the same. I almost changed versions because of this but I was driving and didn't want to stop.

This is a very lovely telling of a timeless classic, but I believe it could be better. The reader for the character of General Tilney is atrocious. At times, I had to follow along with the text because I could not make out what he was saying. I understand that his character is supposed to be a bit cold and rough, and that this is a volunteer production, but GT is not what I expected at all. It really almost ruined the audiobook for me.

I love the cast of voices used, and the book really comes alive. This book has humor other Jane Austen books don't...case in point is the conversation between Henry Tilney and Catherine in Chapter 2. If you are an Austen fan though, you should definitely listen to this book!

It was an amazing book!!! Thank you to all the readers who put time into this awesome classic!!! I gave it four and half stars because James, Catherine's older brother, sounded much to old and General Tilney was terrible!!

Great reading. Enjoyed it very much. The only character voice that bothered me as it was difficult to understand and actually annoying was General Tilley.