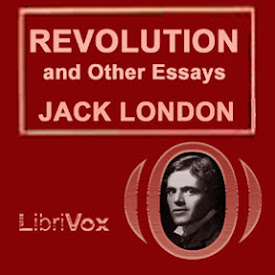 Revolution, and other Essays

A collection of 13 essays written between 1900 and 1908, published in 1910. The lead essay, "Revolution", outlines how and why London renounced capitalism as a failed social system and declared himself an active participant in the "socialist revolution", the last essay is an autobiographical piece, and the essays in between are on diverse subjects. A few of the “essays” are actually humorous short fiction stories; others are serious, sometimes angry rants against capitalistic greed and political corruption. All of the pieces are thought-provoking and excellently written, though only loosely intellectual, highly opinionated, and rife with contradiction, as was London himself. -- Summary by Michele Fry (6 hr 7 min)

The Dignity of Dollars

The Shrinkage of the Planet

Read by Lucretia B.

The Gold Hunters of the North

These Bones shall Rise Again

What Life Means to Me

I never knew he wrote shorts like these. Interesting to see a different side of him other than the adventure stories he is so well known for. Also, the readers all did great jobs.