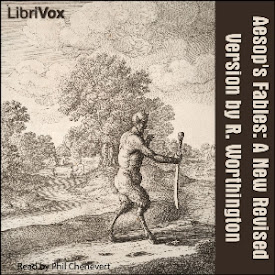 Remember the story of the Ant and the Grasshopper? the Fox and the Sour Grapes? The Boy who Cried Wolf? These wonderful tales and hundreds more have been passed down to us over the centuries. The man credited with writing them, Aesop, was an Ancient Greek slave born about 620 B.C. Aesop is known as a fabulist or story teller credited with a number of fables shining glaringly true light on our human foibles now collectively known as Aesop's Fables. Although no writings by him survive, numerous tales credited to him were gathered across the centuries and in many languages in a storytelling tradition that continues to this day. Many of the tales are characterized by animals and inanimate objects that speak, solve problems, and generally have human characteristics. Scattered details of Aesop's life can be found in ancient sources, including Aristotle, Herodotus, and Plutarch. An ancient literary work called The Aesop Romance tells an episodic, probably highly fictional version of his life, including the traditional description of him as a strikingly ugly slave who by his cleverness acquires freedom and becomes an adviser to kings and city-states. A later tradition depicts Aesop as a black Ethiopian. But whatever his history, the fables depict truths about human behavior, our strengths and weakness that have remained true for 2500 years. (Summary from Wikipedia and Phil Chenevert) (3 hr 27 min)

00 - Some of Aesop's Best Loved Fables: The Goose that Laid the Golden Eggs; …

01 - The Wolf turned Shepherd; The Stag at the Pool; The Fox and the Mask; The …

02 - The Two Pots; The Gnat and the Lion; The Widow and her Little Maidens; The…

03 - The Old Man and the Three Young Men; The Lion and the Fox; The Horse and t…

04 - The Wolf and the Lion; The King's Son and the Painted Lion; The Trees and …

05 - The Mountain in Labor; The Bear and the Two Travelers; The Sick Kite; The …

06 - The Laborer and the Snake; The Bull and the Calf; The Goat and the Ass; Th…

07- The Boar and the Ass; The Fox and the Goat; The Oxen and the Butchers; The …

08- The Father and his Sons; The Owl and the Grasshopper; The Fox and the Grape…

09 - The Wolves and the Sheep; The Fox and the Stork; The Bat and the Weasels; …

10 - The Viper and the File; The Oxen and the Axle-Trees; The Bear and the Bee-…

11 - The Peacock and the Magpie; The Two Goats; The Dove and the Ant; The Eagle…

12 - The Hunter and the Wolf; The Astronomer; The Bulls and the Frogs; The Thie…

Great read. A good listen too with a modern twist to the Morals, thanks!

I enjoyed the book very much. The reader is a little fast though...

A largely amusing and educational collection. I feel that the retelling reflects Victoriian values - hence the need to point out the moral of each tale. For me, it erased much of the humour. Excellent narration by Phil - as always.

spoken clearly. nice to listen to. great job, compared to some others reading aesop`s fables here.