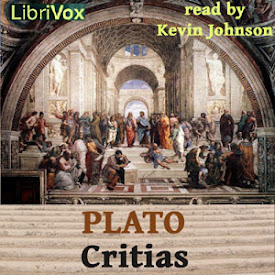 This is an incomplete dialogue from the late period of Plato's life. Plato most likely created it after Republic and it contains the famous story of Atlantis, that Plato tells with such skill that many have believed the story to be true. Critias, a friend of Socrates, and uncle of Plato was infamous as one of the bloody thirty tyrants. (Summary by Kevin Johnson) (1 hr 6 min)

A tale of two cities

This unfinished dialogue narrates the rivalry between Ancient Athens and Atlantis: the former Plato's ideal city; the latter a pseudo-historical region that, once corrupted by its people's flawed behaviour, was punished by Zeus. Because it is incomplete, it is very short, but one can grasp the general moral idea Plato is trying to defend, one of virtue and divinity; Atlantis being its counterexample. Also, the reader does a very nice job.

Eyes closed and laying down

Fastpaced, descriptive and very detailed in my opinion. I reckon this to be better enjoyed listening to it wiht eyes closed rather then on the move. Well read. The origin of the legend of the great Atlantis is of course a story to hear.

The pace of reading is excellent. Each sentence is clear, I wish more audiobook…

I wish the other Dialogues were as well read