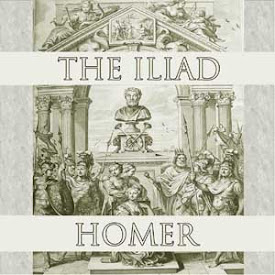 The Iliad, together with the Odyssey, is one of two ancient Greek epic poems traditionally attributed to Homer. The poem is commonly dated to the 8th or 7th century BC, and many scholars believe it is the oldest extant work of literature in the Greek language, making it the first work of European literature. The existence of a single author for the poems is disputed as the poems themselves show evidence of a long oral tradition and hence, multiple authors. The poem concerns events during the tenth and final year in the siege of the city of Iliun, or Troy, by the Greeks. (Summary adapted from Wikipedia by Karen Merline.) (14 hr 29 min)

Book I: The quarrel between Achilles and Agamemnon

Read by Joshua B. Christensen

Book IV: A quarrel in Olympus

Book V: The exploits of Diomed

Read by Joshua B. Christensen

Book VIII: The victory of the Trojans

Book IX: The embassy to Achilles

Book X: Ulysses and Diomed go out as spies

Book XVI: Patroclus fights in the armor of Achilles

Book XVII: The light around the body of Patroclus

Book XVIII: The shield of Achilles

Book XXII: The death of Hector

Having first completed Homer's "The Odyssey", this tale gives greater scope to the time period of its creation and really lets the reader experience the battles on a personal level. But man is it long! ( laughing as I realize the truth of it ) I was clean shaven when I started.... where'd this " ZZ TOP" beard come from?

Overall this was very well done. However, a few chapters were read poorly. ML Cohen was, by far, the best narrator! I highly recommend this book.

ML Cohen, I really enjoyed the chapters you read. You have a nice voice. All others, you did well too

I finally finished this book!

I’ve tried to read the Iliad several times, and failed. Thanks to LibriVox and the volunteers, I finally learned the whole story. 23 of the 24 chapters were very well done.

some readers were a little harf to hear but still, a break book

This is a good example of a successful collaboration. Good rhythm and enunciation.

Before game of thrones, Lord of the rings or marvel comics... there was the Iliad, written by Homer. I hope one day HBO produces a cool mini series of the Iliad & the Odyssey. Homer uses metaphors to convey timeless truths... that are still portrayed today. Take for instance the matchup between Batman vs Superman... this is the modern equivalent of the mortal combat between Hector vs Achilles. Mortal vs an invincible demi-god with only 1 weakness.. not kryptonite, but an achilles heel. The best chapter was Achilles vs Hector. the reader of that chapter gives a mind blowing sensational performance. I went to Greece studying for a master's degree and I got a replica classical vase from 2,500 years ago depicting the epic battle between Achilles and Hector. Being a millennial in 2018, I think you will get PTSD just listening to this audio book. Achilles glared at him and answered, "Fool, prate not to me about covenants. There can be no covenants between men and lions, wolves and lambs can never be of one mind"

I have to say, I love the Iliad and the Odyssey. Just a heads up to prospective listeners: The Trojan Horse never makes an appearance here. It’s mentioned in the Odyssey, and I believe in the Nostoi (lit. “The Returns Home”), but the primary subject of the Iliad is Achilles, Hector, and a handful of Greek heroes. Homer’s stated focus was “The cursed anger of Achilles, the son of Peleos...” Anyone who wants to study good literature should start with the Iliad. There’s a reason we’re still reading and listening to it nearly 3000 years after we think it was composed. Returning to my earlier topic, a lot of Greek literature addresses the problem of what it means to be a good human. The Iliad, in my opinion, focuses on the impact of anger. It is a wonderful story, but you should recognize as well that it is very focused on the effect of Achilles’ anger and vengefulness (this becomes more pronounced after a certain individual dies).