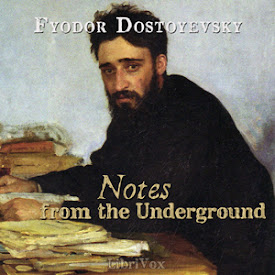 Notes From The Underground (version 2)

Notes from Underground is an 1864 novella by Fyodor Dostoyevsky. Notes is considered by many to be the first existentialist novel. It presents itself as an excerpt from the rambling memoirs of a bitter, isolated, unnamed narrator (generally referred to by critics as the Underground Man) who is a retired civil servant living in St. Petersburg. The first part of the story is told in monologue form, or the underground man's diary, and attacks emerging Western philosophy, especially Nikolay Chernyshevsky's What Is to Be Done?. The second part of the book is called "Àpropos of the Wet Snow," and describes certain events that, it seems, are destroying and sometimes renewing the underground man, who acts as a first person, unreliable narrator. (Summary by Wikipedia) (5 hr 4 min)

Note from the Underground

Like another reviewer, I was required to read this book as a college student, and I missed its power and primitive beauty. The protagonist is an insufferable man that I would probably eject from my house, but he is perversely self-defeating—sometimes like myself and others. He is incapable of making himself happy despite his wretched condition, his alienation, and his sense of anomie. I remember feeling, “he is wasting his life!” I too have felt this way on many occasions. What a book! Dostoevsky seemed to anticipate the modern world!

This is a very clear recording. However, Dostoyevsky put the office to shame of awkward moments, making it difficult to go on with at times.

Most on Librivox know what books they wish to read. It is the readers' voices which are of variable quality. Bob Neufeld, as always, does an excellent job, far above and beyond the call of duty for free internet content. Solid five stars.

This goes into my list of must read classics. The insight Dostoyevsky provides and confesses are witty, insightful and make me painfully aware that I too have similar thoughts and feelings and act can see myself acting no different than him. Spooky, yet fun :)

Good rendering of a difficult work

Bob Neufeld’s reading render’s the ‘Underground Man’s thought more accessible this time around. Having read ‘Notes’ in college, I knew I missed a lot of Dostoyevsky’s thoughts - little nuggets of insight. This production brings those nuggets to life. Highly recommended.

A relatable must read

Great narration! It really adds character to the Underground man. Notes seems to have addressed thought processes of people that have yet to change. We all can relate at one point to the underground man. A must read for anyone!

Seems like his ideas are still holding up rather well in psychology and sociology. They coincide with works of some of the best known names in both fields. Dostoyevsky's understanding of personal and social struggles withstood the test of time.

I'd like to thank the reader for the great job he's done. I was listening to this while commuting, at times especially towards the end of the book, it was hard to restrain from not crying in public 😁