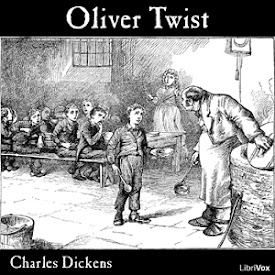 Oliver Twist is an 1838 novel by Charles Dickens. It was originally published as a serial.

Like most of Dickens' work, the book is used to call the public's attention to various contemporary social evils, including the workhouse, child labour and the recruitment of children as criminals. The novel is full of sarcasm and dark humour, even as it treats its serious subject, revealing the hypocrisies of the time.

It has been the subject of numerous film and television adaptations, and the basis for a highly successful British musical, Oliver!. (Summary from Wikipedia) (17 hr 1 min)

Funny how the personalities who review here are like Dickens characters: some sweet, some not at all, some clueless and voluble, greedy and dissatisfied; and dare I say intolerant? Having read A Tale of Two Cities, A Christmas Carol, And Nicholas Nickleby just prior to this, I noticed this in those LV books too. Esp the Ralph Nicklebys who think LibriVox should supply a free book a month like amazon prime! All Librivox productions are free and made by volunteers, people. And the Mr. Bumbles who verbally whip the VOLUNTEER readers! The Scrooges who kick the gift horse in the teeth. Meanies humbug!! LVox volunteers, please may we have some more?

All of the readers who contributed to this Oliver Twist speak clearly, but anyone considering this download should know that the gender and accents of the readers change from chapter to chapter (and the accents are not necessarily English accents but German, American, and so on).

This was an amazing book! May The Force Be With You!

A good Book! some of the readers were hard to hear and understand.

Spoiler and Warning: The dog dies.

Great book as well as reading!

Fantastic story! The syntax and word choice Dickens often uses leaves a lasting impression upon his readers. Additionally, he has a way of making his characters come to life in all of his works, such as the band of robbers in this work or the Crummleses in Nicholas Nickleby (these are just a couple of examples). Despite this praise, however, Dickens' works lack psychological depth, especially when compared to the great Russian novels of Fyodor Dostoyevsky, Gogol, or Leo Tolstoy. I read most of the book as opposed to listening to it because I prefer a physical copy, but had to use this audiobook in order to speed up my reading process. From the chapters that I listened to, I enjoyed some readers, but I was not enthusiastic about others. These ones were the readers who were either young and inexperienced, who had poor audio quality, or who were just, to put it quite simply, boring. However, all things considered, it consisted of (mostly) solid readings of a masterpiece of English literature. Well done!