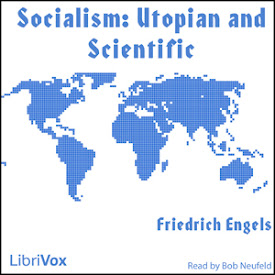 The main idea of "Socialism: Utopian and Scientific" (1880) was distinguishing scientific socialism and utopian socialism. Engels begins by chronicaling the thought of utopian socialists, starting with Saint-Simon. He then proceeds to Fourier and Robert Owen. In chapter two, he summarizes dialectics, and then chronicles the thought from the ancient Greeks to Hegel. Chapter three summarizes dialectics in relation to economic and social struggles, essentially echoing the words of Marx.

Bob Neufeld does another great job. I’ve listened to several of his recordings. The text, however, was lacking. Engels does a good job with the history and evolution of the proletariat, bourgeois, and land owning class. Yet, the theory behind the rise of the proletariat is lacking in the logic department. It would seem that Marx and Engels developed their theories and stood behind them even after, for Engels in particular here, other economic philosophers came along to show how illogical their theories were. I may have missed the complete explanation for when the proletariat assume control (the last chapter), and if I did then that was not careful listening on my part. However, what I did hear/recall seemed more speculation and conjecture than solid theory being put forth. And Engels summation at the end doesn’t help you recollect what he said to that end.

The book itself is quite the great read. Its thorough yet concise coverage of the development of socialism in Europe and the circumstances surrounding the process is admirable. Friedrich's analysis and observations of the three European giant's, France, UK and Germany and their roles in the development of socialist theories are profoundly complex and overwhelming. His account of 15th century onwards' revolutionary events is mind opening. But most importantly, the narrator did an outstanding job. His flow is quite tranquil and his voice takes you all the way to 19th century's Germany and beyond. I feel that I'm Friedrich myself or that he's conversing with me. Thank you Bob for your work and for offering us the opportunity to enjoy this work beautifully and aesthetically.

The book has stood the test of ages in philosophical literature, it makes quite a fantastic reading and what an amazing narration. Once you start listening you won't stop right to the end.

I recommend reading this book on normal speed because at the excess speed it can be hard to concentrate on the readers voice since it distorts too much.

genuinely perfect reading of one of Marxism's most important books. I'd recommend anyone interested in political theory listen to this, it's genuinely as good as audiobooks can get

This audiobook reading was excellent and the book itself the same, I learned a lot about capitalism's history and early proto-socialism

Accessible and interesting. The narrator has good pacing and is a pleasure to listen to.