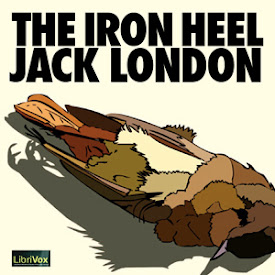 A dystopian novel about the terrible oppressions of an American oligarchy at the beginning of the Twentieth Century, and the struggles of a socialist revolutionary movement. (Introduction by Matt Soar) (8 hr 17 min)

09 - The Mathematics of a Dream

I listened to this audiobook at the same time the Michigan legislature passed its bill on "Emergency Managers" who would render city councils and all other local democracy impotent, be appointed directly by the governor, not subject to oversight, with no cap on compensation, and with the fiat powers of absolute dictator. It made the possibility of a world where the government is in thrall to monopoly trusts whose will is enforced by mercenary armies all that much more imminent and terrifyingly plausible. London makes no secret of his sympathy with the working class, but he roots it in a realistic vision where even a future utopia still clings so to male supremacy such that they date things from 1 "Brotherhood of Man" and where a pompous academic haughtily corrects the 'errors' in a primary source text written by a mere woman. Things may be better in London's future utopia, but they're evidently not quite all they could be. London also has a section where he discusses how certain privileged skilled trades unions would become like medieval guilds where membership passed from father to son. He clearly is in favor of the IWW's One Big Union of the working class, regardless of skilled, semi-skilled, or unskilled status. This insight of his can be generalized to the way in which any "meritocratic" system would quickly degenerate to a strict class hierarchy. Though he doesn't explicitly address this aspect, it's such an obvious consequence of his reasoning that I think we can still give him half a century's precedence over Michael Young. This is a richly rewarding book read at a professional level of quality.

Excellent reading by Matt, faultless. The book itself is slow to start but becomes better by the third chapter. The inginuity and originality of the books conception are somewhat hampered by the complexity of the plot. The conceit that the book is a historical manuscript does little to assuage the readers desire for a more coherent character arc or overall message. The abrupt ending leads the reader unsure wether the author knew where he intended to go, but the reader is no longer that bothered about arriving.

I enjoyed this immensely. It was my first introduction to Jack London's work and I will be reading/listening to more. The narrators rhythm, clarity and cadence suit the book and really help to bring it to life. I highly recommend.

of this compelling social novel by the legendary and controversial, versatile writer of fiction and non fiction Jack London. Of course with London you will not find the higher diction and exposition of the greatest writers, yet this novel is so important. London was better at short stories, journalism, and excelled at adventure novels. London is an emotional writer with adequate writing talent to express his above average insights and experiences. This book is so prescient, nay more, it is a legitimate argument that inequality, war,economic chaos, class and ethnic divisions, chaos("the pecking order", to vent our pain and anger inflicted upon us by the oligarchy so we displace and project on each other),exploitation and misery are still with us as it was from the inception of civilization and sadly will go on into the future. I can answer only for the US. In the 1970's we were on the path to a social democracy. But that was stopped by the oligarchs and plutocrats here. Ever since the working and thus also the middle class have been pushed back towards the robber baron inequality by this insane neo-liberal, false political economy by conservatives and liberals both. From what I gather the same thing started backwards too in the UK with Thatcher, continued by new labour and now the Tory-libdem coalition is going mad with privatization. This privatization of public services and institutions sucks up more of the taxpayer and makes the poor more miserable, and since privatization is based on profit, public services and goods are worse than in the traditional public sector but costs the state more. And contracting public services to private concerns has created a bureaucracy that makes a socialist state seem streamlined.

An Epic Reading Of A Book Extremely Relevant To Our Times

That there ever was a "middle-class" is an anomaly to the oligarchs! When you see the struggle of thousands upon thousands of Americans simply to be paid a wage they could live on. When you see the diabolical lengths these "captains of industry" went to stop the reasonable accommodations of peaceful protesters by use of hired thugs and the powers of government under their control. When you see the many maimed, crippled, and killed. The men, women, and children. You realize these psychopathic "elites" would either create a media fear psy-op and/or release a deadly plague to prevent- in times of financial collapse (soon- money printers go brrrrr!) these "elites" would sooner cull and control "the useless eaters" than face the rightful redistribution of their astonishing wealth and seemingly boundless power! They've only met in many extra-governmental "think tanks" usurping key power players in politics and public opinion makers to move forward their plots and schemes to bring about The New World Order!

Excellent reading of Jack London's account of the coming revolution. The early chapters are rather rhetorical but interesting all the same as an example of how early Marxist social theory was informed by the (now discredited) model of unilinear social evolution. Sounds heavy, but it's very well explained. Later chapters are exciting and sometimes harrowing descriptions of life under the oligarchy and abortive attempts at revolution. The reader, Matt Soar, has a breathless delivery that add to the listener's feeling of being an insider on the revolutionists' trials and plans. Well done indeed, Matt. Highly recommended. The BookWorm (Manchester UK)

Excellent job by Matt. I love Jack London and enjoyed the book despite not sharing his politics. He has legitimate points about worker exploitation that were very pressing at his time and still exist in a different form now. But maybe killing everyone with money and taking it will not create a utopia where no one takes advantage of anyone anymore. The entirety of human history proves the power void will always be filled and usually not in a benevolent fashion.

I can't remember the last time a book made me think or feel as much at this one. A must read for anyone who want to right the wrongs of the capitalist system.