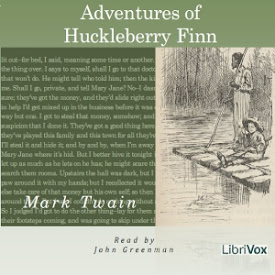 Adventures of Huckleberry Finn (Tom Sawyer's Comrade), often shortened to Huck Finn, is a novel written by Mark Twain and published in 1884. It is commonly regarded as one of the Great American Novels, and is one of the first major American novels written in the vernacular, characterized by local color regionalism. It is told in the first person by Huckleberry "Huck" Finn, best friend of Tom Sawyer and narrator of two other Twain novels.

The book is noted for its colorful description of people and places along the Mississippi River. By satirizing a Southern antebellum society that was already anachronistic at the time, the book is an often scathing look at entrenched attitudes, particularly racism. The drifting journey of Huck and his friend Jim, a runaway slave, down the Mississippi River on their raft may be one of the most enduring images of escape and freedom in all of American literature.

The book has been popular with young readers since its publication and is taken as a sequel to The Adventures of Tom Sawyer. It has also been the continued object of study by serious literary critics. The book was criticized upon release because of its coarse language, and became even more controversial in the 20th century because of its perceived use of racial stereotypes and because of its frequent use of the "N" racial slur. (Summary by Wikipedia) (10 hr 0 min)

beautifully narrated, dense story line, love the use of the vernacular of the time. As an educated black man I find no problem with this book, I knew how those times were.

As a 52 year old I never read this book as a child or in school. the narrator or reader of this book did a great job in distinguishing each character. it was easy to follow and understand. the. Accents and reading of the characters was performed wonderfully.

This book is a gem! I'm in awe about the history of blacks way back when and what freedom really means. John Greenman gives life to the characters and the story. Thank you.

John Green man's performances of Mark Twain do an excellent job of bringing the text to life and capturing the tone and attitude of the setting. Highly recommended!!!

I had a blast listening. I have had many laughs during story. Reader adding southern accent adds to immersion in story!

Great reading, must listen to story. be sure to listen to tom sawyer first