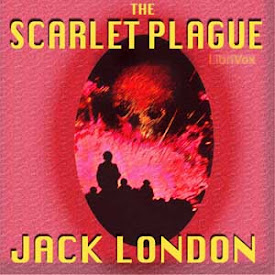 Known mainly for his tales of adventure, this work of science fiction by Jack London is set in a post-apocalyptic future.

It's 2072, sixty years after the scarlet plague has depopulated the planet. James Howard Smith is one of the few survivors of the pre-plague era left alive in the San Francisco area, and as he realizes his time grows short, he tries to impart the value of knowledge and wisdom to his grandsons. Through his narrative, we learn how the plague spread throughout the world and of the struggles of the handful of survivors it left in its wake.

The Scarlet Plague was originally published in London Magazine in 1912.
(Summary by Wikipedia and James Christopher) (1 hr 56 min)

Minor London. In this post-catastrophe novel, a one time professor looks back on the years of world wide plague, which started in 2013 and relates his history to the present day. London's treatment of events is at its best when describing the arrival of the disease and the immediate aftermath. Some prescience here as regards to the emergence of world wide epidemic and the modern spread of deadly viruses. Elsewhere it's less convincing and the relationships between characters are thinly sketched out, indicating a lack of overall conviction or perhaps a commercial imperative for the writing. Interestingly, given his politics, London does not see the collapse into barbarism as necessitating a call to socialism, though there is some cruel levelling. The reader is generally good, although his cadences can be monotonous.

Fascinating futuristic story detailing the fall of modern civilization. It is a quick read, filled with conflict, survival and thoughtful rejuvenation. I am amazed by the foresight of Jack London to write such an accurately descriptive piece, though he knew not the advances of technology in our age.

[London's] politics as referenced by a fellow reviewer

Jack London was at heart an anarchist, not a socialist as is so mistakenly held today. Perhaps the idea of "London as Anarchist" has been conditioned out of society's mind, being that he, unlike others who are to this day directly thought of as anarchists, is widely read by children and adults alike. Regardless, Emma Goldman wrote of this of London: "As the artist he did not fail to see the beauties of anarchism, even if he did insist that society would have to pass through socialism before reaching the higher stage of anarchism.". Now, perhaps his thoughts on the attainment of anarchism differ from others who label themselves anarchists, whether they be anarchists historically or contemporarily. But I will take the words of Emma Goldman over those of modern-day critics regarding London's beliefs, as they knew one another personally, if only having met twice. And she clearly viewed their end goals as one in the same. Moreover, and most importantly to modern-day anarchism, isn't our goal the dissolution of the State, or more specifically, the dissolution of imposed authority, regardless of the innumerable schisms in anarchist schools of thought? Shouldn't we be working as one and not bickering over words, since anarchism divided is exactly what the State and its many cohorts want?

This is a book that left me needing a good dose of Wodehouse when I was done. This is the story of the fall of the human race to a plague known as the Scarlet Plague, and the life that arises from those that survived. It is sad, unbelievably depressing, and unlike other stories, there is nothing at the end that leaves you with a feeling of hope, only despair. Eat chocolate when you are done. The reader was excellent, and the recordings were great. The story was just too sad for my liking.

This was published in 1912 before the Pandemic of 1918 and it is written about life 60 years after an horrific plague in 2013. I read this during the COVID 19 pandemic. London had some insightful predictions of population and wireless communication. A little off on transportation and fortunately appears to be off on politics and social class. Compelling work. It could have influenced many stories over the passed century. As with all London's works, it is well written and the reader does a very good rendition.

Well read. Probably written on a napkin at some bar. JL can never escape his unflagging class bias, nor can he escape his fascination with the word "conflagration." It is a very short work, so I advise you to read it just to help you better appreciate truly accomplished writers of scifi.

I love dystopic survival stories, 5 stars from me. If you did not get much enjoyment from grandpa's war stories as a kid, I can see where you might feel there is a lack of action, but I loved it.

I'd like to answer the previous. Don't let political grandstanding be your purpose here. Jack London constructed characters better than anyone and they have always great depth