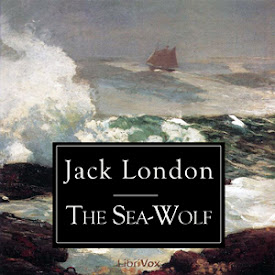 The Sea-Wolf is a novel written in 1904 by American author Jack London. An immediate bestseller, the first printing of forty thousand copies was sold out before publication. Of it, Ambrose Bierce wrote "The great thing—and it is among the greatest of things—is that tremendous creation, Wolf Larsen... the hewing out and setting up of such a figure is enough for a man to do in one lifetime." (Summary by Wikipedia) (11 hr 29 min)

01: I scarcely know where to begin

02: I seemed swinging in a a mighty

04: What happened to me next

05: But my first night in the hunters' steerage

06: By the following morning the storm

07: At last, after three days of variable wind

10: My intimacy with Wolf Larsen increases

11: The Ghost has attained the southernmost point

12: The last twenty-four hours have witnessed

13: For three days I did my own work, and Thomas

14: It has dawned upon me that I have never

15: There was a deal of cursing and groaning

16: I cannot say that the position of mate

17: Strange to say, in spite of the general foreboding,

18: The next day, while the storm was blowing itself out

19: I came on deck to find the Ghost heading up close

20: The remainder of the day passed uneventfully.

21: The chagrin Wolf Larsen felt from being ignored

24: Among the most vivid memories of my life

26: Wolf Larsen took the distribution of the whiskey

28: There is no need of going into

30: No wonder we called it Endeavour Island.

32: I awoke, oppressed by a mysterious sensation.

33: We waited all day for Wolf Larsen to come ashore.

35: Next day, the mast-steps clear, and everything in readiness,

36: For two days Maud and I ranged the sea

37: At once we moved aboard the Ghost,

39: The day came for our departure.

I can't rate the book...I couldn't even get through the first chapter. The reader had such a monotonous voice and did not enunciate well at all. Couldn't understand half of what he was saying. I really wanted to listen to this book, but with this reader, not a chance.

surprisingly not about a wolf at sea. still an excellent and thrilling story. I didn't think I would like it, because I have no interest in the theme of the book. but it is very good, well narrated and keeps you interested. I never felt bored listening to it. I have recommended to many people.

a capturing tale of life on the sea & castaway on an island. some romance thrown in as well, but nothing more than romantic feelings described. and becoming a man under a tyrant. an excellent story. the reader though is very monotone very often and I would find my mind drifting or getting sleepy then have to rewind. he has a wonderful voice, but lacks changes in pitch.

Great adventure. Reader gains ones appreciation as story unfolds. Jack London’s life was too short. He surely got the short stick on parents and accomplished so much in his mere forty years. His work will stand the test of time and never go out of date.

One of my all time favorites!

The simple sterness of a philosophy formed by harsh struggle for life, contrasted against the more common moral conception. This is an adventure framing questions of simply deep origin, told in the captivating style which is the literary fingerprint of Jack London.

JL was an American treasure! What angers me is someone writing a long review of a book and reader they did not like at all. in that case, my advice is to STFU and move along. You do not need to be an asshole!

Great adventure story. The nautical details can only have been written by someone that has sailed the high seas in a working sailboat. The character development of Wolf Larsen is masterful. A true classic at many levels. Good , consistent reader does a great job with accents.

A interesting tale tho some of the recording skipped and jumped about which frustrated the flow of the story. well read tho the reader had a well suited voice, rough and well seasoned that suited the tone of the book. fully enjoyed it.