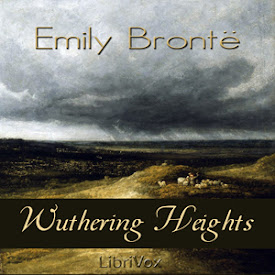 Emily Brontë's only novel, published in 1847 under the pseudonym Ellis Bell, tells the tale of the all-encompassing and passionate, yet thwarted, love between Heathcliff and Catherine Earnshaw, and how this unresolved passion eventually destroys them and many around them.

Now considered a classic of English literature, Wuthering Heights met with mixed reviews by critics when it first appeared, with many horrified by the stark depictions of mental and physical cruelty. Though Charlotte Brontë's Jane Eyre was originally considered the best of the Brontë sisters' works, many subsequent critics of Wuthering Heights argued that its originality and achievement made it superior. (Summary by Wikipedia) (14 hr 48 min)

I have read the book, Wuthering Heights before. I have seen two film adaptations. This audio version of the book, read by Ruth Golding, is by far the most profound experience I have had with this story. The reading was absolutely perfect. Ms. Golding was able to render the complexities of the characters in a way I had never experienced. I was drawn into the narrative as I tried to understand these complex characters. As the last chapter ended, I felt bereft of the company of the people in this book, and it grieved me. This book, and this audio version in particular, has my unreserved recommendation.

Wuthering Heights is a book I was dying to read but with having little time to read and finding librivox.org I decided to download Ruth Goldings reading of Wuthering Heights. Though I am no expert, I have listened to several audio books in the past. Ruth's talent is far above average. I could not believe I ran in to this type of talent on a volunteer based recording!! Thank you, Thank you for sharing your talent with all, Ruth!

Does this book really have a reputation of being romantic? It's all about a bratty, messed-up guy taking out his pent-up rage against the people who bullied/mistreated him, and then their children, and then his own kid, while nobody has the guts (or power?) to stop him. And occasionally he mopes over the equally bratty woman he loves. A fascinating read, anyway. I noticed another reviewer described the recording as monotone. Maybe he has this recording confused with another one? The reader struck me as extremely expressive -- she does a voice for each character, often a little over the top, but very distinctive and enjoyable.

First of all Wuthering Heights is a great piece of literature and I can't recommend it enough. Ruth Golding definitely did justice to it and read it excellently with enough animation to distinguish characters and not sound silly. I began listening to the audio book as I was painting, and before I knew it I was half way through the book. This is the my first audio book and I thought I wouldn't find it as pleasurable as reading, but I couldn't be more wrong. I think I'm going to give Far from the Madding Crowd a go now.

An amazing book. Ms Ruth Golding makes a very good effort to read the book well. Her diction is clear and she does pretty well with providing accents and voices to the characters. I have enjoyed listening to this recording. Thank you, Ms Golding, for taking the time to make this recording.

Wuthering Heights is a wild, passionate story of the intense and almost demonic love between Catherine Earnshaw and Heathcliff, a foundling adopted by Catherine's father. After Mr Earnshaw's death, Heathcliff is bullied and humiliated by Catherine's brother Hindley and wrongly believing that his love for Catherine is not reciprocated, leaves Wuthering Heights, only to return years later as a wealthy and polished man. He proceeds to exact a terrible revenge for his former miseries. The action of the story is chaotic and unremittingly violent, but the accomplished handling of a complex structure, the evocative descriptions of the lonely moorland setting and the poetic grandeur of vision combine to make this unique novel a masterpiece of English literature. Many thanks to Mrs Golding for her passionate reading of the novel. A wonderful listening experience.

I can't understand how this book became so well liked. I hated every character in the book! The only reason I trudged through it was because I wanted to see if somebody had bumped him off. It was a good thing I was listening to it rather then sitting there reading. I would of felt like I had wasted a huge amount of time. I do have to say the narrator did a great job and it was easy to distinguish which wretch was which.

The story isn't delightful though it is intriguing. It's a strange, twisted love triangle fraught with selfishness, revenge, and most other human follies--and yet it makes fascinating reading. Ruth Holding is a treasure! We are very fortunate to have her volunteer her talents for a free reading like this one!