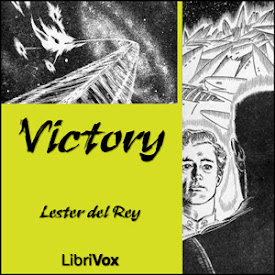 Lester del Rey (1915 – 1993) was a Golden Age science fiction author and editor closely connected to John W. Campbell Jr. and Astounding Science Fiction magazine. He also founded Del Rey Books, a popular publishing label he edited with his wife Judy-Lynn. Victory is the story of an undefended Earth in a warring galaxy. It appeared in the August 1955 issue of Astounding Science Fiction. (Summary by Gregg Margarite) (1 hr 38 min)

This short story has a lot going on in it, but its still a good story. I had to listen to it 3x to take it all in. Earth doesn't fight wars. Earth is neutral in all wars. Oddly enough, no one ever fights Earth. Oh they might think about it, and talk about it, and even start a war nearby to take out the other planets that would protect Earth, but no one ever quite gets to Earth. Duke just returned from fighting one of those wars. He is disgusted with what he perceives as the cowardice of his home planet. Imagine his surprise when he is recruited by that planet to serve in a higher capacity... just maybe he might learn the secret of why Earth seems so cowardly and yet so untouchable. Gregg M is an awesome reader. Thanks Gregg for another sci-fi goodie!

A very interesting story that shreds the notion that wars settle anything and at the same time details the pain of winners as well as losers. This is an unfolding discussion of how maturity (Read "adult) is not capable of being understood by the "juvenile" mindset.

Victory is interesting as a curiosity from the earlier days of sci-fi, but that's it. Further, the narration was flat which didn't help... any sense of rising drama is drained from the text.

I knew you not, but for your voice, yet I pray for you, you and your soul, that they may reach the kingdom of the Lord.

The story was just ok, but Greg Margarite it's always a pleasure to listen to.

Not what you expect

Not your typical conquest story. Good story, great reading as always by Gregg!