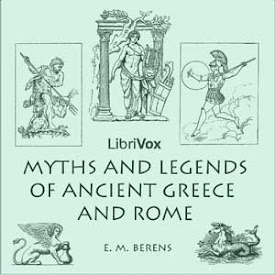 Myths and Legends of Ancient Greece and Rome

This is a comprehensive collection of all the major and minor gods of Rome and Greece, with descriptions of festivals and retellings of major mythological stories. (Summary by Sibella) (11 hr 23 min)

01 - Preface, Part I: Myths, and The First Dynasty

02 - The Second Dynasty: Chronus, Rhea, Division of the World, Theories as to t…

15 - Third Dynasty: Night and Her Children- Nyx through Eros and Psyche

16 - Third Dynasty: Night and Her Children- Hymen through the Charities or Grac…

17 - Third Dynasty: Night and Her Children- Horae through Asclepias

19 - Public Worship of the Ancient Greeks and Romans

23 - Legends: Ion and Daedelus and Icarus

27 - Legends: Oedipus and The Seven against Thebes

30 - Return of the Greeks and Romans from Troy

What do you ingrates do listen out for errors and something you can complain about to judge the readers especially those of you who sound like you could of done so much better..Story was not read to your standards?? Instead of listening to the story which is free you rather judge than listen.If you can do better, do it!!! Instead of whining about a free, much appreciated site..

comprehensive and fun. this book is great for anyone desiring a conceptual knowledge of greek mythology. the narrator from new south wales australia, is great. there are several mistakes by other readers (i.e. nike, demeter, dionysis, were misread) but the error doesnt detract the whimsy of reading about ancient gods. good job librivox.

I remember using this for study and worship back when I still did religion. great text. however, the 3rd reader's inflection is poorly timed, and emphasis is placed in the wrong parts. I understand word structure is different between aussie, murrica, and brit, but it just doesn't sound very good. since this is an audio book, I can't give it 5 stars, even though I give the actual book 5.

I love the stories of these myths

I grew up reading these old stories and was happy to get to revisit them via Libravox. Most of the narrators were outstanding. â¡

As interesting as this book is, the readers weren't all that great. All in all it was just what I expected and I'm satisfied.

No shame but no glory either

Book review: "Myths and Legends of Ancient Greece and Rome" by E.M. Berens. Greece is the cradle of Western civilization. Even after thousands of years our culture and society continues to be heavily influenced by the beliefs, myths and legends of these ancient peoples. For that reason, once upon a time the educational system in the United States included formal instruction about the classics, and in his desire to provide students with a concise volume on this subject, E.M. Berens penned this work. In it you will read about the origin of the gods, their quarrels, love affairs, and blessings to humanity. You will also become acquainted with ancient heroes like Hercules, Jason, Ion, Cadmus, Persius, and many more. There is also a section on their religious beliefs and practices, for which I was particularly grateful. It is truly a wonderful book with only one flaw: its brevity. One of the things that makes the myths and legends of Ancient Greece eternal is the depth they carried. The stories are masterpieces because they dig into the essence of what it means to be human, in all its frivolity, fatality and search for purpose. Unfortunately, due to its shortness, this element is utterly missing in "Myths and Legends." However, I do not wish to discourage anyone from reading it, since this book serves as a good introduction or an overview on the classics.

Good overview, but misses some "interesting" details such as what body part of Uranus created Aphrodite and some other myths I enjoyed reading but weren't in this book. Seems really light on the Roman myths too, but I haven't really heard many so maybe they just took all the Greek ones.