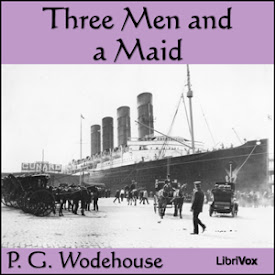 Three Men and a Maid

This book with two titles, Three Men and a Maid in the USA and The Girl on the Boat in the UK is a typical PG Wodehouse romantic comedy, involving, at various times: a disastrous talent quest, a lawyer with a revolver, a bulldog with a mind of his own and a suit of armour!

The maid, or marriageable young woman, of the American title is red-haired, dog-loving Wilhelmina "Billie" Bennet. The three men are Bream Mortimer, a long-time friend and admirer of Billie, Eustace Hignett, a poet of sensitive disposition who is engaged to Billie at the opening of the tale, and Sam Marlowe, Eustace's would-be-dashing cousin, who falls for Billie at first sight. All four find themselves on an ocean liner headed for England together (hence the British title), along with an elephant-gun-wielding young woman called Jane Hubbard who is smitten with Eustace the poet. Typically Wodehousian romantic shenanigans ensue. Even Estace's redoubtable mother (a Theosophist author and public speaker) fails to quell the excitement.(Summary by Wikipedia, adapted by Tim Bulkeley.) (5 hr 42 min)

This little-known but pricelessly funny early Wodehouse is given a superb reading by Tim Bulkeley. This is my first experience of TB’s talent, and I shall scurry to acquire the others as quickly as if I had a dozen aunts on my tail.

Another good Wodehouse classic! Eustace is the son of a selfish, overbearing mother who fears losing her house so much, she'd rather keep her son single for his whole life than see him fall in love and marry. Enter pretty Willhemina, who is first engaged to Eustace, than to Sam, and then to Bream (fickle thing!). Typical comedic situations ensue after that, but of course, with a happy ending for all. Reading was nicely done, I really enjoyed this story.

Fantastic Reading of a Wonderful Story

This reader is simply one of the best I've heard. I've bought books on tape with far worse readings than what this story offers for free. The story is very well written and has a very dry British sense of humor which comes off extremely well with this reader. I highly recommend you give this a listen.

A refreshing change in pace for Wodehouse

Wodehouse weaves a complex intertangled set of personal views and lives in a hilarious tale of miscommunications and presumptions to create a constantly changing expectation of the listener of this book. The reader does a fine job with voices and inflections to make each character's life become real. Excellent listen!

Has some funny moments, as is to be expected in a P.G. Wodehouse story, but the racism, misogyny, and misandry of the era are tiresome in the 21st century. Ends rather abruptly with leaves unfinished business. Not particularly recommended unless you are simply listening to all P.G. Wodehouse novels to check them off a list.

5 stars! the story And the reader

Both the story and the reader definitely 5 stars...didn't want it to end...one I'd never even heard of but it one of the best - though it was. to me. not very Wodehouse like...no butler.but a gun! oh. what gun...odd but true.

I couldn't wait for each coming chapter, I was so enthralled. I love Wodehouse and this one is so Charming I hated for it to end. Mr bulkeley is a genius reader and adds to the delightfulness of the story with his excellent skills with the characters .

three Men and a maid

the narrator had a wonderful voice and accent for this story. Light-hearted humor and just a bit difficult to follow each character and scene in spite of different voices by narrator. Went back twice to recap. Very enjoyable. Recommend for bedtime listening.