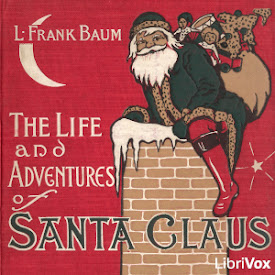 The Life and Adventures of Santa Claus (Version 4)

Every child knows about Santa Claus, the jolly man who brings gifts to all on Christmas. There are many stories that tell of his life, but the delightful version relayed in The Life and Adventures of Santa Claus is by far the most charming and original of all, at least in my opinion. Only L. Frank Baum, the man who created the wonderful land of Oz, could have told Santa's tale in such rich and imaginative detail. The book is divided into his youth, his manhood and his old age and of course ends in how he became immortal and had to recruit helpers in almost every household around the world to keep the joy and happiness going each year. This delightful book has been recorded by LibriVox volunteers several times, including a wonderful dramatic version, but I think it is nice enough to do again and will also be a chance for new readers to contribute their unique voices to this tale. I hope we can finish this in time for the Christmas season but if not, that's OK too. Santa would understand! - Summary by The publisher and phil chenevert (3 hr 26 min)

The Child of the Forest

How Claus Made the First Toy

How the Ryls Colored the Toys

How Bessie Blithesome Came to the Laughing Valley

The Wickedness of the Awgwas

The Great Battle Between Good and Evil

The First Journey with the Reindeer

How the First Stockings Were Hung by the Chimneys

The Mantle of Immortality

When the World Grew Old

The Deputies of Santa Claus