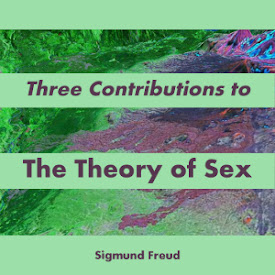 Three Contributions to the Theory of Sex

In this little book Freud discusses three areas of human sexuality:
1. Sexual perversions or aberrations. In this essay, Freud concludes that "a disposition to perversions is an original and universal disposition of the human sexual instinct and that...this postulated constitution, containing the germs of all the perversions, will only be demonstrable in children“.
2. His second essay on "The Infantile Sexuality", argues that children have sexual urges, from which adult sexuality only gradually emerges via psychosexual development. Looking at children, Freud identified many forms of infantile sexual emotions, including thumb sucking, autoeroticism, and sibling rivalry in childhood.
3. In his third essay, "The Transformations of Puberty", Freud formalized the distinction between the 'fore-pleasures' of infantile sexuality and the 'end-pleasure' of sexual intercourse. He also demonstrated how the adolescent years consolidate sexual identity under the dominance of the genitals in puberty.

Originally published in 1905, Freud added significant insights over the next three editions to increase the length to about double its original size. This is the third and last edition, published in 1920. (Summary by Phil Chenevert and Wikipedia) (3 hr 32 min)

I. THE SEXUAL ABERRATIONS: Deviation in Reference to the Sexual Object

THE SEXUAL ABERRATIONS: Deviation in Reference to the Sexual Aim

General Statements Applicable to All Perversions

The Sexual Impulse in Neurotics

Partial Impulses and Erogenous Zones: Explanation of the Manifest Preponderance…

II. THE INFANTILE SEXUALITY; The Sexual Latency Period of Childhood and its In…

The Masturbatic Sexual Manifestations; The Infantile Sexual Investigation; The …

III. THE TRANSFORMATION OF PUBERTY; The Primacy of the Genital Zones and the Fo…

The Theory of the Libido; Differentation Between Man and Woman; The Object-Find…

titled well exact to the matter