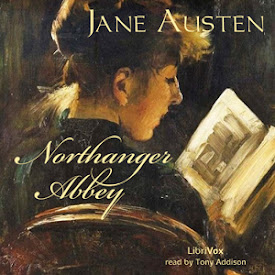 If it is a truth universally acknowledged that a good-looking girl cannot fail of attracting a clever young man does it follow that the reverse is also true? If the man comes of a terrifyingly dysfunctional family and the girl in question likes to see spooks and horrors round every corner, yes. Morland by name, Lackland by nature, Catherine, not altogether addicted to the heroine role in general, finds this greatness thrust upon her in the (fortunately, principally financial) fantasies of her would-be inamorato's father, the General. When the General finds she is the artless, simple girl that she appears and not the creature of his frankly heartless imaginings of her, he thrusts her - but I leave the event to your fevered, no doubt Gothick, even, imagination to determine

A deliberate parody of the horrific strand in popular culture, as Jane Austen no doubt herself would observe if she could see the burgeoning cult of the Undead in Unliterary culture - It is as if Northanger Abbey had never been written! Hear it and laugh. - Summary by Tony Addison (9 hr 50 min)

The reader has a strange style...

I have listened to this version twice in preparation for a class i teach yearly on Northanger Abbey. The reader's style IS idiosyncratic, but it wonderfully captures the Gothic atmosphere this book so brilliantly parodies. lots of fun!

the reader is hard to keep up with... probably because of his style

My previous review was for a different version. I apologize