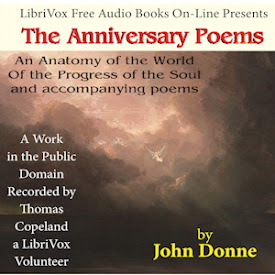 Elizabeth Drury, daughter of Donne's patron, Sir Robert Drury, died in 1610. A year later Donne laments her hyperbolically as the soul of the created universe. In "An Anatomy of the World: The First Anniversary," he poetically scrutinizes that year-old corpse, the world, as if he were performing an autopsy (an "anatomy"). He finds it corrupt in every part, the dead woman having carried with her every spark of goodness it once contained. To commemorate the second anniversary of Miss Drury's death, Donne's "Progress of the Soul" (1612) celebrates her liberation from this world, urges readers to follow her example, and performs a cheerful spiritual meditation upon the process of death, burial, and corruption—cheerful because death frees us from the inconveniences of this life and serves as a portal to the next. Each poem is introduced by an encomium that, though purporting to be written by another hand, appears to be the poet's own work. (Summary by Thomas Copeland) (1 hr 10 min)

Read by Thomas A. Copeland

Read by Thomas A. Copeland