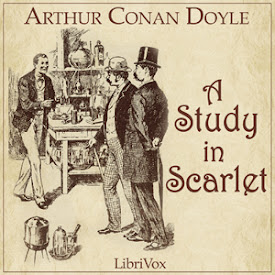 A Study in Scarlet

A Study in Scarlet, a short novel published in 1887, was Sir Arthur Conan Doyle's first Sherlock Holmes story. At the beginning of the book, Dr. Watson meets the detective for the first time and we ride along with them to the scene of a murder. The crime baffles the Scotland Yard detectives, but of course Holmes solves it easily. In the second half of the story, the scene shifts to Utah as we learn the murderer's history. The action returns to London in the last two chapters. In his first adventure, Holmes demonstrates many of the traits for which he later became well known: meticulous study of a crime scene, brilliant deductive reasoning, aptitude for chemistry and music, and the somewhat annoying habit of withholding crucial facts from Watson (and consequently the reader) until the conclusion of the case. (Summary by Laurie Anne Walden)

1-2 The Science of Deduction

1-4 What John Rance Had to Tell

1-5 Our Advertisement Brings a Visitor

1-6 Tobias Gregson Shows What He Can Do

1-7 Light in the Darkness

2-1 On the Great Alkali Plain

2-3 John Ferrier Talks with the Prophet

2-6 A Continuation of the Reminiscences of John Watson, M.D.

This was my first Sir Arthur Conan Doyle to listen to. I was not aware that he jumps backwards. I almost stopped listening to the reader in vol 2 because i missed the connection. I thought it was a completely different book until she finally reached a character with the same name. Then i was curious and hung on to see the connection. The reader did a great job although i would have preferred a male reader since the main characters were male.

l was confused when suddenly we appeared to be in a different story in Utah, but it all became clear later. Good story. Good reader. Do some more Holmes for us Laurie - I've also listened to Laurie reading the 'Hounds' - excellent

This story is an excellent introduction to AC Doyle's work. The narrator, Ms. Walden, is superb. She clearly understands the story deeply and put a great deal of work into the recording. Here's hoping she will record other books soon.

I read this book a couple of years ago and wanted to recap it before carrying on into the lore of Sherlock. Great book, great story and Laurie makes it a pleasure to listen to.

The writing technique that Sir Arthur used in creating this first Holms book pleasantly surprised me. Read very well by a single reader.

As an author, I know it is a difficult business writing mysterious novel full of suspense. It takes a lot of thought upfront to connect the various relationships. Yet, Sir Arthur Conan Doyle pulled it off outstandingly well! The way he interweaved the character's separate lives with the others was both unbelievable and incredible. I must also commend and applaud Sir Arthur Conan Doyle's masterpiece in the aspect of grammar. Fantastic job on comments, semicolons, em-dashs, colons, et cetera. Sherlock Holmes remembers everyone and everything about the and does an amazing job pasting all the stories together into one to solve the mystery! This was my first Sherlock Holmes novel and not to be my last! I wait in eager anticipation to fully engrossing myself into his other epistles! Thank you, Andrew Schulz, for recommending these incredible stories! This was a great, fast-paced read! As our friend would say: "To a great mind, nothing is little."

This is the first book in the Sherlock Holmes series. It is entertaining and well-read; the only reason I am not giving 5 stars is due to the first two chapters of part two (which are very dry). The story picks up again after that. Anyone who has read either The Adventures or The Memoirs first may be slightly surprised at the dedication of the whole second half the novel to the backstory of one of the main characters.

Sweet revenge, I love the ending.